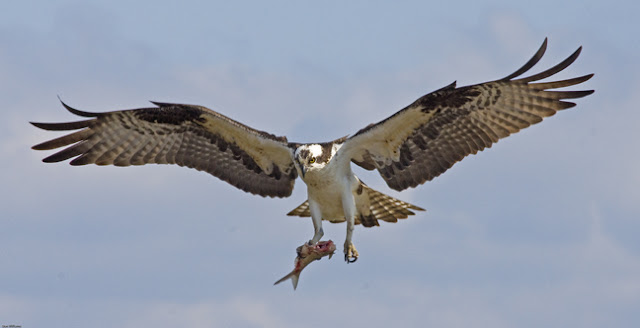 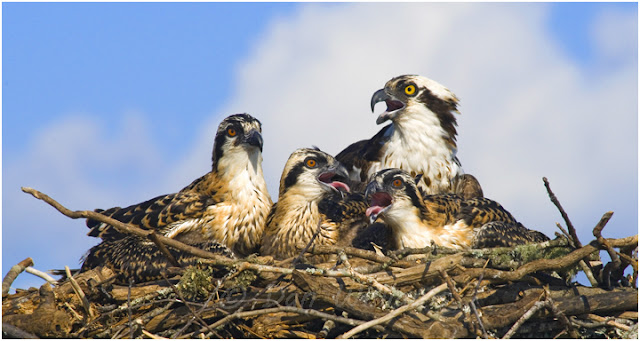 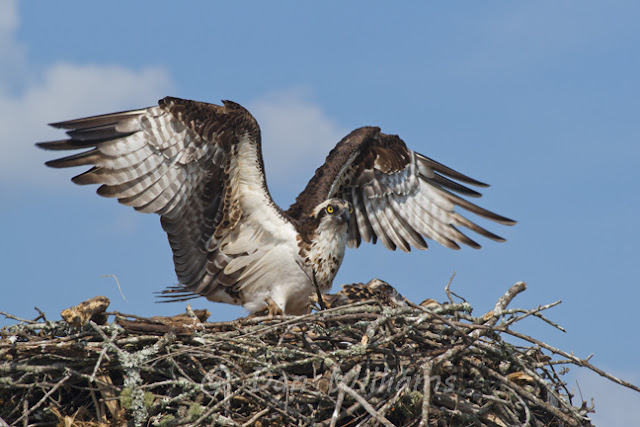 For the past several years, I've been fortunate to have a pair of Osprey nesting near my home. This same pair of birds has returned year after year to this nesting sight, and it seems like every year they become more accepting of me and my camera. It's as though we have come to know each other in a way that allows us to trust and respect the other. The pair of birds have been kind to me, in that they have allowed me countless photo ops, and done so without fear or expectations. I feel a kindred spirit with these birds, and I have a deep respect for them and how they lead their lives. They dedicate themselves to their family, and they are relentless in their pursuit of food for their young. Without any concern for weather conditions, they find a way to provide for their chicks. Hard working doesn't really seem to describe the intensity of their daily struggle. We all could learn so much from the example of these birds. Perhaps they serve to teach us all about what really matters in life. ﻿
Posted by Dan Williams at 11:21 AM 2 comments:

A Quiet Cove on the Potomac.....
In March of 2012 I found myself staying with a friend at his home in the Northern Neck of Virginia. I had done a wildlife art show in the area, and he was kind enough to host me for the week. I decided to leave before dawn, and see if I could find something interesting to shoot at sunrise. My drive took me along the Potomac River heading north toward my next stop in Baltimore. The road is an historic route through a beautiful section of the Virginia countryside.
Along the way, and shortly before dawn, I came across a sign that pointed the way to George Washington's birthplace, which has now been turned into a national historic park. Although still dark, the sky was just beginning to get light, and so I decided to pull in and check it out. Even though I had arrived long before anyone else who might work there, I decided to park and do some exploring. Just behind the visitors center was a quiet little bay that meandered out into the Potomac River. I climbed down a steep slope to the shoreline and began walking toward the river.
As the sun was starting  to rise across the bay, the cove began to light up and reveal itself to me. Looking first at the rising sun, I quickly noticed this motionless heron standing before me in the shallows of the water looking to find a fish for his breakfast. I had not bothered to carry a telephoto lens with me, so I had to frame a composition that would lend itself to my 24 - 105 lens. I knew I only had seconds to frame my shot before the sun would break the horizon and the heron would decide to fly away. I set the camera to aperture priority mode, the lens to F16 and took the shot. Knowing that the lighting was going to be tough, I shot the image in RAW, as it would give me the best latitude in post-processing the image. All in all, I am pretty pleased with it, and I feel blessed to have shared this moment with the heron. Too bad every morning can't begin this way for everyone. I hope you enjoy the image. ﻿
Posted by Dan Williams at 7:49 PM 1 comment:

Using Fog to Create Depth in Your Photos 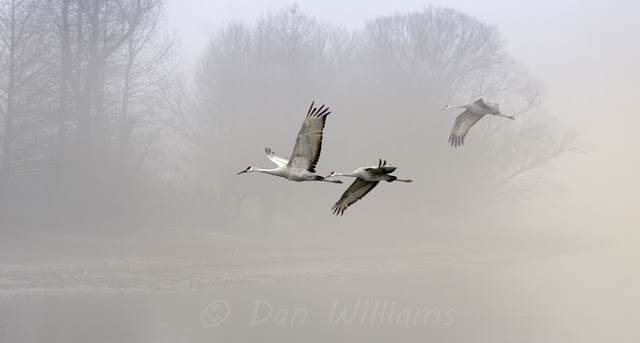 Waking up to a foggy morning is a wonderful way for a photographer to start the day. Nothing creates a "mood" quite like a misty fog  just after sunrise. It can be just the ticket for an otherwise boring photograph.
Fog has a way of layering a photo. Depending upon the placement of subject elements within the photo, it's actually possible to achieve an almost 3D effect. In the case of the Sandhill Cranes above, the photo appears to have three very distinct layers. The background of trees sits deep into the fog, while the bird on the far right appears to sit in the middle of the fog. The two birds in the foreground, because of their sharp focus and lack of filtering from the fog, appear to lay on a plane that extends beyond the rest of the image. As you study the image, you need to assess just how important a role the fog has played in making this image work. Imagine the same image without the fog, and you have an image that might very well never see itself made into a print. The fog seems to battle for a place in this photo.........perhaps even the real focal point of the entire image.
The next time you see fog in your area, I suggest you get out and experiment with what role it can play in your images. If you want to add some  depth to your landscapes, your flower photos, your macro images, or whatever else you like to shoot, then don't let the fog escape your lens. Good Luck.
﻿
Posted by Dan Williams at 8:48 AM 1 comment:

Dan Williams
I have spent my life creating art. After losing the sight in one eye several years ago, I was forced to give up my career as a wildlife carver/sculptor, and focus my full attention to my love for bird photography. My work has been heavily influenced by my love and respect for wildlife painters, and by the Hudson Valley School of painters and their wonderful use of light. In my photographs, I try to create compositional images that share the basic elements of fine art and bring the viewer into the natural world of birds.